Bonnie and I are members of the Old Pueblo Miata Club, located here in Tucson.  This is an unusual automobile club in that the emphasis is on get-togethers and travel, rather than maintaining and improving our Miata sports cars.  Because of this, there are about as many women as men members.  If you'd like to learn more about the OPMC, click on either of the two preceding links or on the following club graphic. 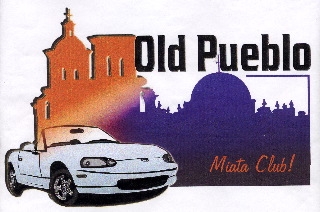 Canyon Lake is located about 100 miles north of our Tucson home and 51 miles east of Phoenix.  But since the club took the scenic route both ways, we ended up putting 310 miles on the car that day!  This beautiful lake was formed behind Mormon Flat Dam, which was constructed during the years 1923-1925.  The main source of the Lake's water is from the Salt River, which drains thousand of square miles of mountain watershed from eastern and central Arizona.  Tortilla Creek and Boulder Creek also flow into the Lake ~ while usually dry, these creeks can be raging white-water torrents after storms.  Canyon Lake is the third and smallest at 950 surface acres in a chain of four lakes created by damming up the flow of the river.  Two others, Apache Lake and Roosevelt Lake are upstream.  The fourth is Saguaro Lake downstream.  Canyon Lake's shoreline is 28 miles long, so there is plenty to see during a one-day trip.

There were a total of 14 Miata's on the Canyon Lake "drive out".  Depending on the time of the day and the elevation, the temperature ranged from 50F to 72F degrees, which meant that it was often chilly!  Fortunately, the Miata has an outstanding heater which kept us warm while on the road, even though the car's top was down.  On the water though ~ it was cold!  L  The weather was partly cloudy for most of the day, which of course means that many of the pictures aren't as bright as they might otherwise be.

You may use any of the above pictures for any purpose and may do so without giving me credit.  Note that these pictures have been downsized for those with slow connection speeds.  If you'd like copies of the original JPG pictures, send me an E-mail telling me which pictures you want and I'll be happy to send the original pictures to you at no charge!